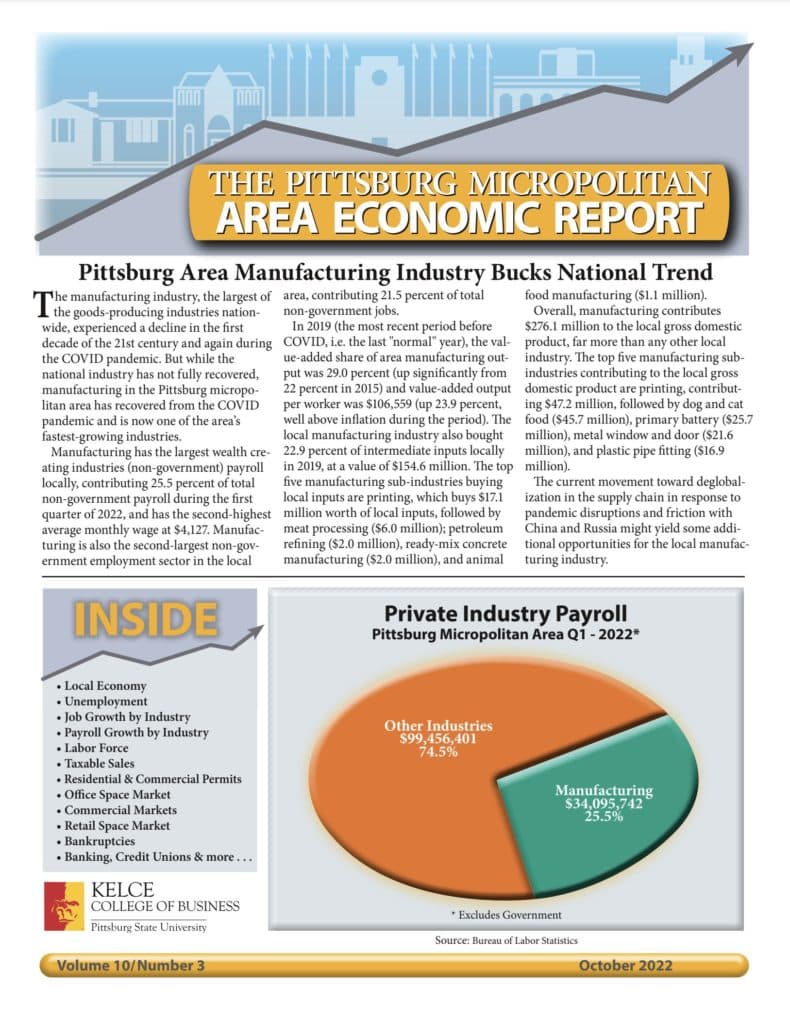 Davidsson’s report states that roughly $579 million has been invested in Pittsburg over the past nine years, which includes $102 million in industry infrastructure. Several local businesses have recently expanded their footprint in Pittsburg and added jobs, including Avail Enclosure Systems (formerly AZZ), EaglePicher Technologies, Kendall Packaging, Vinylplex, and US Awards, to name a few.

Manufacturing in the Pittsburg micropolitan area contributes to 21.5 percent of all private-sector jobs, and represents the second-largest non-government employment sector in the local area. According to the economic report, manufacturing contributes far more to the local gross domestic product (GDP) than any other industry, at $276 million annually.

Productivity is also increasing at a very healthy rate locally with the value-added component of production increasing to 29 percent in 2019 (up from 22 percent from the last four years of record) and output per labor increasing a significant 23.9 percent.

According to the City of Pittsburg’s target industry analysis conducted by Angelou Economics, Pittsburg has more than four times the concentration of manufacturing than the average US city. For this reason, custom manufacturing and advanced manufacturing are a strategic focus for city leaders.

“It’s fair to say that Pittsburg has historically been a manufacturing hub in the region,” says Deputy City Manager Jay Byers. “Manufacturing itself has changed dramatically over the years, and particularly in the last decade. Industry overall is moving more toward custom manufacturing and advanced manufacturing, and Pittsburg’s businesses have kept pace, and they have benefited from that.”

The Pittsburg micropolitan area is a prime place for manufacturing and warehousing, and the city expects future industry growth. The widening of US 69 to four lanes will certainly benefit these businesses and bring more opportunities to the region.

The creation of the city’s new Montee Industrial Park, north of Atkinson and west of Free King Highway has already proven fruitful and led to the development of Watco’s new transload facility, set to be completed by the end of this year. The industrial park can accommodate over a million square feet of industrial space and is a prime location for industries that benefit from rail access. The new industrial rail park combined with the FedEx distribution center opening this month make Pittsburg a logistics hub directly addressing supply chain issues and further supporting the thriving manufacturing industry.

“The city is supporting the expansion of our existing manufacturing operations, we have robust incentives available, and we’re partnering with the Pittsburg Area Chamber of Commerce and Pittsburg State University to take it to the next level,” added Byers. “With developments at the National Institute for Materials Advancement (NIMA) at PSU gaining steam, we have set the stage for the next generation of advanced manufacturing.”

Beyond the manufacturing industry, the report points to several other factors currently contributing to Pittsburg’s thriving local economy. To learn more about our city or to download the full report, visit https://www.pittks.org/city-stats.

The mission of the City of Pittsburg is to provide exceptional services, facilities and activities with integrity, professionalism, excellent customer service and a commitment to economic vitality.