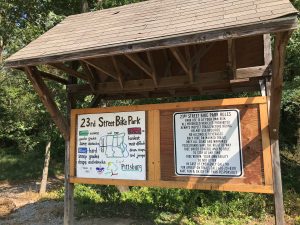 Volunteers are teaming up with the Pittsburg Parks & Recreation Department to rejuvenate Pittsburg’s 23rd Street Bike Park. Cyclists, nature enthusiasts and community members will come together over the next few weeks to beautify the park.

Boy Scout Ethan Lomshek is leading the effort for his Eagle Scout project. He chose to focus his project on 23rd Street Bike Park after noticing fallen limbs and overgrowth along the trail needing to be cleared away. He says the park has special importance to him.

“It has been a place I have always been a part of, from building the dirt track to riding the trails with my dad since I was a little kid,” says Lomshek.

“Lots of people and organizations have shared our trail-clearing event on Facebook,” says Lomshek.  “Bicyclists, scouts, nature lovers, students and people who just want to help make Pittsburg a fun place to live are planning to come.”

Lomshek says anyone “willing to work hard and get sweaty” can volunteer. He also stresses the job will be physically challenging and children should be carefully supervised.

Several workdays have been set aside for event – September 23, 29, 30, and October 6, from 12:00 pm to 5:00 pm. Follow-up maintenance sessions will continue once a month through the winter.

To learn about other volunteer efforts or to adopt a park, call the Pittsburg Parks & Recreation Department at (620) 231-8310.